Friday 31 March & Monday 3 April We Spoke and Hackuarium will present a two-day workshop introducing composers to the exciting possibilities of creating music for Living Instruments. Living Instruments are an ensemble of musical instruments based on microorganisms such as paramecia, built in Hackuarium by a team including classically trained musicians and professional and hobbyist scientists. Performers stimulate the micro-organisms to generate sounds, for example by applying heat and movement. Enlarged video footage of the movement of fermentation bubbles, paramecia and more is displayed on a large screen behind performers. Video-recognition software turns these movements into data which is translated into sound via MaxMSP patches.

In this workshop, composers will learn about the instruments, go away to develop their own MaxMSP patches, and return to record and perform their pieces for the Living Instruments at a free, intimate show in the Oto Project Space on Monday night.

Workshop attendance is strictly limited to 10 composer spaces. Email us to apply. Please send your CV and a few sentences about why you’re interested in working with the Living Instruments.

Learn about the Living Instruments and see how they interface using sample MaxMSP patches.

Write your own MaxMSP patch at home.

Fine-tune your piece on the Living Instruments, sound check.

Free concert at the Oto Project Space
All pieces will be recorded for a special show on Resonance FM.
Free beer from Kernel Brewery

‘Living Instruments’ was produced jointly by We Spoke New Music ensemble and three members of the Hackuarium community.

With ‘Living Instruments’, performers stimulate pieces of nature like microorganisms to generate sounds, for example by applying heat and movement, watching paramecia through a microscope, touching moss or playing with the proximity of slightly radioactive everyday objects. Sensors are placed at several locations to measure activity of the organisms and objects. The recorded data is then turned into sound through synthesizers. The nature of these instruments allows the performers to en gage with them very interactively and the cyclic behaviour a of the living pieces is reflected musically with rich grooves and rhythmic patterns.

Enlarged video footage of the movement of fermentation bubbles, paramecia, moss, visualised traces of radioactivity and other curiosities of nature are displayed on a large screen behind performers, highlighting the common dynamics between the scien tific process and the musical outcome.

‘Living Instruments’ reveals a hidden world, encourages interdisciplinary thinking and presents biology, electronics and their relation to sounds as an ethereal and fun experience. The performers slip into the roles of experimental scientists forming a hybrid setup where the interaction between humans and other living matter generates music. 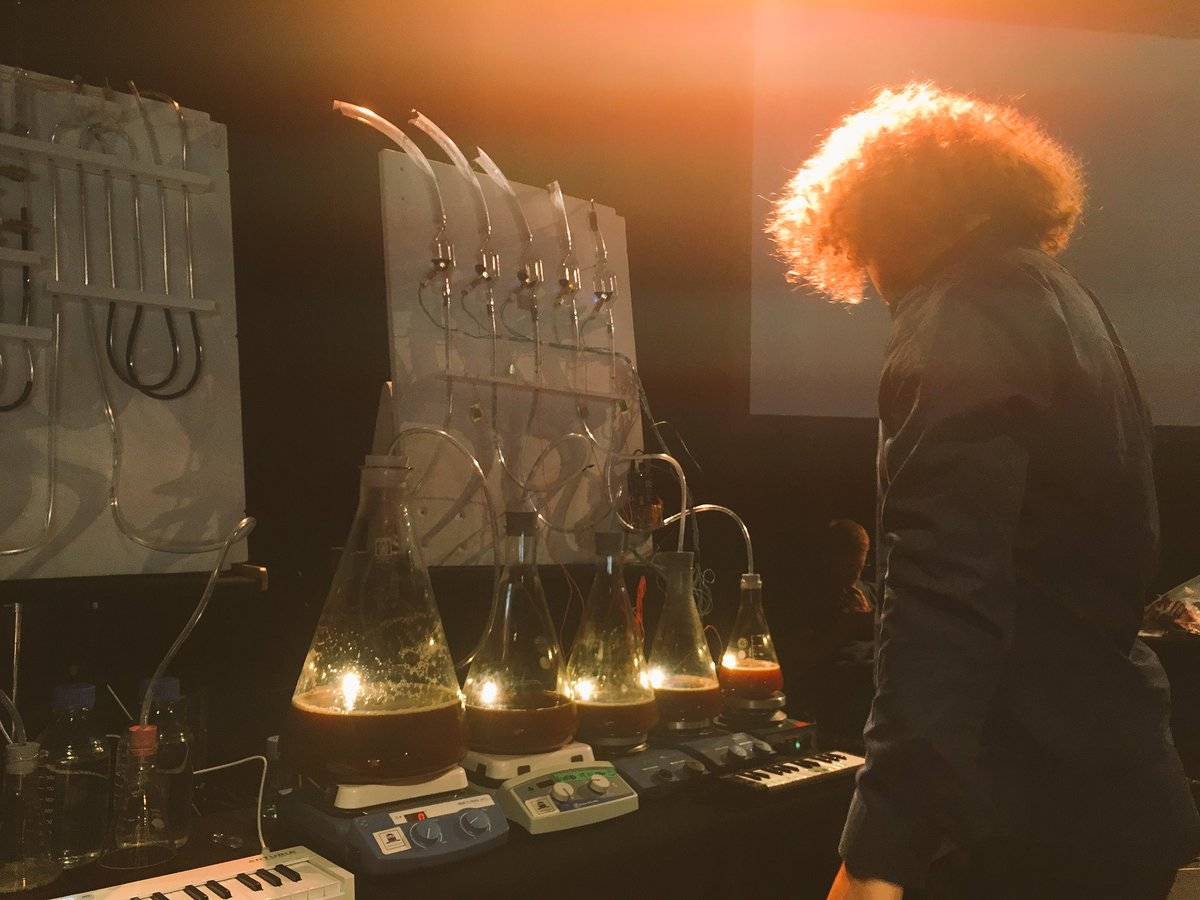 With Living Instruments, performers stimulate the microorganisms to generate sounds, for example by applying heat and movement. Enlarged video footage of the movement of fermentation bubbles, paramecia and more is displayed on a large screen behind performers. Video-recognition software turns these movements into data which is translated into sound via MaxMSP patches.