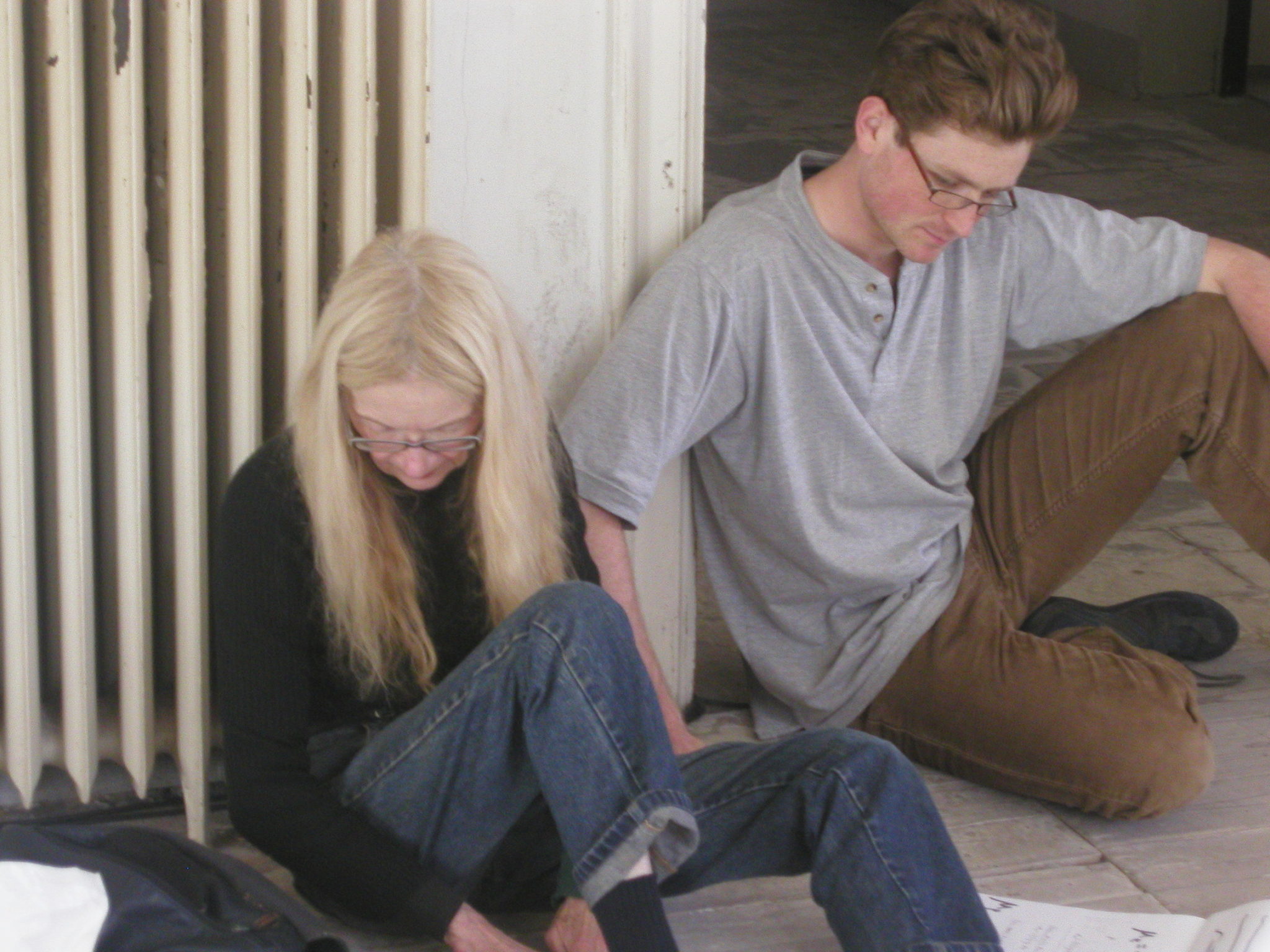 I imagine her explosive joy working in Kingston before dawn in her one winterized room, curled up there under blankets listening to my father’s radio show on Christmas, scouring Google for the latest discoveries in gravitational wave theory & interviews with Karl Lagerfeld, cooking brown rice and cauliflower in her rice cooker; ecstatically, excruciatingly lonely –
& dismissively grunting at my romanticizing images.

Maryanne Amacher.
“i made the decision to follow Duchamp – rather than making many productions via John Cage. A few
acts! with potential to make some significant changes for the future rather than numerous clever ideas for new pieces and today’s concerts! more about all this later.”1

To valorize Maryanne Amacher is not just to cry out against her death, but to fantasize the repositioning of an entire field away from the dead-end street of record/online-shop genre-labels (“experimental”) and into actuality. To praise Maryanne Amacher is not just to fantasize a life for her beyond near poverty and isolation, but to take the Cagean “discovery” of the listener as something more than an end point leading us back to the simulacra of the concert hall or, even worse, to the reverent reenactments of neo-avantgardes.

To begin with Cage: WAYS OF HEARING (as she so often writes). Not concerts or installations or “concert-installations”: sound characters, mini-sound series, sound screenings, sonic telepresence, dramatic narratives, … . “How sounds are perceived – what perceptual modes they trigger, where and how they exist for the listener – becomes as important in shaping an aural architecture as the sonic information: frequencies, tone colors, and rhythms.”2 Sound Characters, individual audio profiles with highly differentiated acoustic characteristic and with names like “The Fright”, “The Hardbeat Force”, “The Burning Gold”, and “God’s Big Noise”, literally interact (are overlaid, approach each other, overwhelm each other) within a given sonic scenario (maybe a mini-series staged in short – or not so short – consecutive segments over a period of days or weeks, or a sound screening – a narrative installation structure repeated regularly which visitors are meant to experience from beginning to end). These Characters not only articulate their specific acoustic characteristics in relation to those of the actual presentation space (that is, how sound might travel up & down its stairs, how it might slither through a certain wall or floor, how it might slowly waft down from far above as it did through the dome of the unheated Parochial Church late late one night in Berlin in 2006), they also articulate the virtual world of the scenario (“the audience walks into the ‘world of the story’ – enters the set”3) and its thematic foci (gravitational waves, muons, patented lifeforms, wreckage from the 20th century, etc). The work is not the sound (how irrelevant, the expectation of certain listeners that she produce “new” sound material for each public presentation), the work is not the technical setup (though her care for it and detail is unmatched), the work is not the ideas it might refer to (scientific discoveries, etc); the work is the non-place, both here and there, which it reveals within us – between us, our culturally programmed sensory apparatus, and the world.

“All of this was in contrast to most musical practice, where composing usually amounts to procedures of simply rearranging and modifying existent musical figures, that is other men’s tunes & giving them a personalized framework in time. (‘notes without ears’) Silicon composers are now achieving this faster and often better.”4
Indeed! No more notes without ears!
Let us instead put pearls in our ears & marvel at the immersive color of The Book’s interface! Let us send our secrets to the bottom of the Atlantic ocean & broadcast them through the former CIA/KGB submarine listening devices that still litter the ocean floor! Let us send Christian von Borries into space with an orchestra and conduct Wagner in zero gravity! Let us replicate atmospheres of our neighboring planets here on Earth, play our sounds within these, and observe the results! Let us re-imagine the possibility of electro-acoustic instrumental music as a space where performers & audience “meet neurophonically, in interaural space” – “acknowledging in musical composition the double function of ears and neuroanatomy in both receiving and emitting sound” – a space where “the audience…discovers themselves as AN INSTRUMENT JOINING THE PERFORMERS IN A REALIZATION OF THE COMPOSITION, a remarkable NEW RELATIONSHIP…”5
“Will rap music in the depths of the ocean sound like the underwater ‘drummers’ in Neal Stephenson’s The Diamond Age? How would pre-historic Mozart sound if we simulated characteristics of the Pre-Columbian atmosphere? How different is the sound of thunder on a mountain top? The music of Beethoven travelling through the oceanic waveguide, sounding through the world’s five oceans. What if thunder occurred underwater.”6

No wonder then when her works often garnered more excitement in the visual arts world and with the likes of Sonic Youth, Xiu Xiu, and the Yeah Yeah Yeahs. Which other composer could be a Guggenheim fellow one year, win the Golden Nica another, and perform at Woodstock ’94 the next?
And yet all of this, all of these visions, from pearls in the ears to submerged thunder, went unrealized. Lack of funding, no interest from presenters. Instead she’s asked again and again to play the festival circuit, concerts, gigs, to reduce her Sound Characters & Scenarios to, at best (& still nothing to scoff at) , vivid one-off performances. Or, in more recent years, along with the codification of “sound art” into an accepted art form with its own institutions and bureaucracy, she’s asked to make “installations” where she still must fight tooth and nail for anything beyond the genre’s “reduced” aesthetics. And again & again she’s called “difficult.” Difficult because she attempts more than adding another production to a venue’s roster. Difficult because she attempts more than the needs and requirements of professionalized, myspace genre compatible “experimental music.” Difficult because she attempts to realize her works on their own terms.
Which visual artist, which director, which designer, which scientist would be faulted, labeled “difficult” for this???

And yet – and thus (so is life in the New Music barrio), Maryanne Amacher remains a subjunctive composer. With so much of her generation’s contribution misunderstood into style, she was at least alone: never cowering into concert/instrumental bastardizations of herself, never resting on a single legacy, never letting her radicality slip in the attempt to grab onto a place in official music history. As the most generous artist I know, she remains, as Roland Barthes said of Beethoven, “a musician with a future.”

In my journal I find surprisingly little from the time of our first meeting; not much more than an odd notation of the phonetic pronunciation of her name (“Am-ah-shhé”) – all too much to write down?
On the last night of this first visit, hours after her performance, we return to her 21st floor suite in an old East German apartment building overlooking Berlin. We drink, she smokes. We fry onions and garlic on the small hotel hot-plate for pasta.
Some time in the morning, 4 or 5 am, we descend the tower in an elevator to meet her ride to the airport. Still pitch black out, just south of the city we can see a spectacular electrical storm breaking.
I can see her smiling face as the taxi drives into the storm.