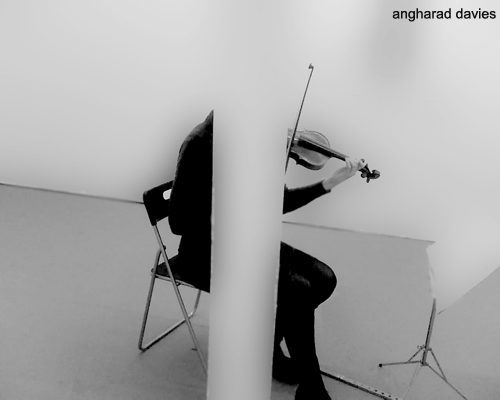 This piece was commissioned by Alasdair Campbell for Counterflows Festival in Glasgow in 2015. I asked Sebastian Lexer to collaborate with me so that we could continue our sound enquiries that we had begun with my first duo release with Tisha Mukarji, endspace for Another Timbre in 2007, and my solo six studies release for Confront in 2014. He recorded and edited both of these CDs and it made sense to work with someone who had a history with my sounds.

The first performance was at Garnethill Multicultural Centre in Glasgow. The squarely proportioned room with its faded disco ball helped frame the decision to play in the centre with the audience sitting around me on the floor and the four bass amps in each corner of the room. In its simplest form it is a piece that explores the deeper sonorities of the violin with live processing and manipulation. Sebastian and I, both experienced improvisers, challenge the conventional duo by presenting a more indeterminate piece that slowly unravels itself and the instrument.

In 2015, I’d been reading about the state of unknowing and contemplating how being in this state perhaps is inherent to improvising. How I find it a struggle to be fully present and allow the music to unfold without tinkering with already tried and tested sound or unconsciously referencing the music I was brought up on and subsequently studied. Musically speaking I was interested in finding ways to not finish phrases neatly and to not control where the music might go, to allow the music to unfold in good time. I was also looking for ways to give more substance and fullness to my violin and often choosing to plug into a bass amp so as to get that depth and focus on some of the sounds that would otherwise be inaudible.

Although the piece follows a rough sketch of material and what might happen at certain intervals, it still has plenty of improvisatory unknowns to deal with as the piece plays. I hadn’t fully appreciated that each bass amp has its own personality or character, and trying to get four to react similarly creates a certain tension as well as what might happen to my violin as I begin to unravel it.

“It was like witnessing an act of self-destruction, the infliction of discomfiting chaos out of which came a new calm. The deep frequencies were still there in the backdrop – a heartbeat, or the shelling of a faraway city, or the bass lines of a party to which you’re not invited – but the piece ended in serenity, content in the imperfect but beautiful here and now.” Kate Molleson, Scottish Herald, April 2015

Angharad Davies is a Welsh violinist working with free-improvisation, compositions and performance.

Her approach to sound involves attentive listening and exploring beyond the sonic confines of her instrument, her classical training and performance expectation.

Much of her work involves collaboration. She has long standing duos with Tisha Mukarji, Dominic Lash and Lina Lapelyte and plays with Apartment House, Cranc, Common Objects, Richard Dawson’s band and Skogen. She has been involved in projects with Tarek Atui, Tony Conrad, Laura Cannell, Jack McNamara, Eliane Radigue, Juliet Stephenson and J.G.Thirlwell.

She has released records on Absinth Records, Another Timbre, Potlatch and Confrontrecords.

Her album Ffansion | Fancies was voted in the top 12 albums for Radio 3’s Late Junction.